Revenge of the Banana!


Hold on to the good times while you're included because you never know when nor why you might be ostracized. But if you do find yourself on the outside for no apparent reason despite showing nothing but loyalty.. the best revenge is simply your continued SUCCESS! The proof of which will always be self evident. So don't be a jerkface ever because when all is said and done, you don't want to look back and question your intention. If you're a follower and treat others shitty because you're preoccupied with what others might think.. can't be associated with someone you perceive an outsider? People won't remember your associations. They will remember, however, how you made them feel! Best to be real and true to the right side of the story because you never know if that camera crew documenting for some school project might turn into a nationally released major movie.. Memory is a funny thing! It's so fucking weird to watch yourself on a big screen and realize how fuzzy and foggy the details are of just a typical random night of your life 2 years before. I only had the vaguest recollection of Josh saying there was gonna be a camera crew there one of the many nights we spent at the Rebar.. couldn't remember if it was one of the 2 or 3 I was asked to McFondlette. I only slightly wondered if there was maybe a chance I would show up in the film figuring I'd probably get a quick "woo!" split second spot from in the audience since I was there a lot. I would have been satisfied as such. Boy, was I surprised to find my screen time was closer to 5 whole minutes than 2 seconds! Even here in the preview is me obviously hamming it up for the camera and yet I swear I don't remember them being there except for (after seeing it on the big screen last year at SIFF ~ Seattle International Film Festival) in the green room at the end when we were saying our good byes at the end of the night. To say I'm a method actor would be an understatement! It's true that I can only contribute this to the fact that I was no longer in character in that scene. 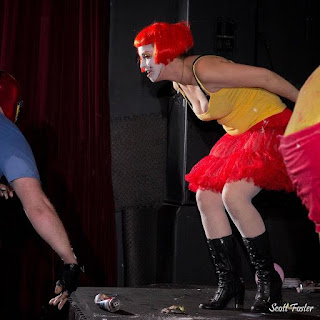