Do what thou will shall be the whole of the law. Love is the law, love under will. 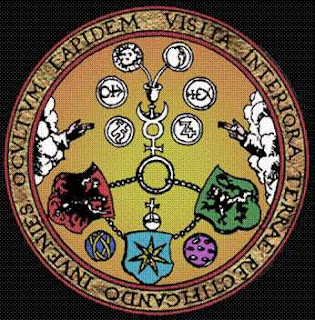 There's a common misperception of Aleister Crowley as "the most evil man in the world" that would have such notions as "Man has the right to kill if he will" interpreted to mean murder but that is not what Thelemites are referring to at all, not in the slightest. They do mean it in the same argument used by gun enthusiast and members of the NRA but even then not quite as much as it would seem. The sentiment is that one should do what they will at all costs and if someone is hell bent on thwarting them, stopping at nothing, then one has the right to remove that obstacle so that their will can be accomplished. In the most basic sense it is the will to live, pure and simple. Man refuses to not adhere to the belief that he has a purpose in life due to the fact that he was born so it is fully justifiable to protect his own life from any and all adversary that would take it from him. Here the line is blurred in that we only perceive physical threat or rather acknowledge it in the here and now and only take action against it when it can be proven a clear and present danger when presented or maneuvered in the flesh of the one who is the originator of intent. Murder is otherwise celebrated as victory and success and exists in every single facet of Western civilization in a system known as capitalism. It is vitriol!

"Capitalism inevitably and by virtue of the very logic of its civilization creates, educates and subsidizes a vested interest in social unrest."
-Joseph A. Schumpeter (1883–1950) Austrian-American economist

Why? Because by definition it is the privatization of the means of production, distribution, and exchange, characterized by the freedom of capitalists to operate or manage their property for profit in competitive conditions. Capitalism must first create a competitive condition in order to be sustainable. So what has become of this? A society conditioned to maintain a consistent rate of growth in order to establish a persistent need for commodities so that there is the constant opportunity for free enterprise to flourish. Doesn't sound bad, does it? Of course not, we are conditioned to be opportunist. Opportunity means freedom, not restraint, right? Freedom for the few to commit murder of the populace justified as success or survival of the fittest due to what the economists/psychologists/physicists (often referred to as Illuminati) keep secret yet is very much common knowledge amongst them: It is vitriol!

A growth rate of 7% which is perceived by most (myself included because I'm terrible at arithmetic) as reasonably low and harmless is perceived by capitalist as highly profitable. Why? Because anything with a growth rate of 7% will double in 10 years. You probably won't believe me if I tell you what this means to us as humans so I won't bother with explaining it.. I'll let professor do it instead. Here watch a bit of this: