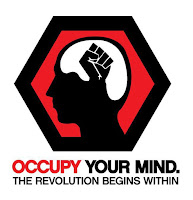 I think I'm ready to quit Occupy Seattle. It's turning out to be nothing but an unproductive distraction! I'm all for a leaderless movement BUT everyone in that movement has to be hyper aware that if the movement is to have any kind of force each individual must take the utmost care to constantly establish and maintain organization. What I believe is OS's fatal flaw is that broke into Work Groups before ever having assembled. It didn't have solidarity to begin with nor did it wait until GA was at a critical capacity to deal with it's needs and issues and thus go through the process of proposing each and every issue or need of the whole group and explain reasons why they should be dealt with outside of GA in a newly established Work Group. It simply copied the list of WG's from OWS and immediately broke into a wide variety of self appointed leader made sub-assemblies staking their claims like they were gold mines and then disassociated themselves from GA as if their time was way better suited spent in WG (as understandable as it is unforgivable)..

This then paved the way for growth so that now newer members are told to join a Work Group to get involved and they are then either finding WG's that are already dictated by a core group controlling them who behave as they already have a grip on the situation and don't need any assistance (in which case why was the work group formed if it was merely a need for a few people's attention? couldn't the GA have elected a team of 2-3?) and/or refuse to listen to new ideas with an attitude of seniority (come on.. OS is barely 2 mo old) OR they hardly take the time to properly analyze and judge the existing WG situation while trying to integrate and instead march off to form their own new WG without as much as any kind of research or communication as to the need for and purpose of said WG and how it will contribute to the GA as a whole. As a matter of fact newer WG's have told me that you don't have to go before GA to get approval to be a new WG!?

So at this point THERE IS NO GA! No one is representative of anything established by the GA only, maybe ~ only if marginally committed to their own organization, representative of a segregated WG that has managed to undermine the weakly established, if you can even call it established, system of becoming a recognized OS WG who fails to communicate or recognize not only what their purpose and participation is aiming for and what they're responsibility is but also what other groups are doing and when to pick up slack, aid, collaborate, delegate, or back the fuck off!

For an example Media WG has suddenly, without communicating their intentions nor asking or offering assistance ect to Arts & Entertainment WG taken over booking and staging entertainment at Westlake permanently on Saturdays. Media? So it's basically whatever is released to the press is law I guess... great :/ See how this works? Media is a real winner! Check out this loophole they must have set up early on ~ GA passed resolution saying anyone talking to media or City on behalf of OS must first receive approval from GA. But if you call yourself "Media WG" then you must have approval then already, yeah? So what if (hypothetically) Media were to be infiltrated and corrupted by a covert entity? Well then OS would officially make an ass of themselves at best, at worst become completely undermined and overruled by their self appointed authority and whatever agenda they wish to play! What did we need a "media work group" for anyway? Some people made the movement look foolish when interviewed on camera while some others new how to handle their responses and paint a better face. So why didn't we seek to improve those who tended to fall short instead of cutting them off and telling them they weren't good enough to represent the 99%?? What are the qualifications we decided on were mandatory for someone to be an official media rep?

So I realize I may just be cranky from the Full Moon and I don't mean to pick on one particular WG so I apologize to Media for using them as a sole example.. but I'm frustrated!! And I can't tell where or what to do with myself to remedy the situation other than breach the topic somewhere and somehow.. so I blog for right now in protest of the protestors I guess.. Way to show solidarity (yes, I do recognize I'm being a hippocrite in some regards and I'll readily admit my own faults in all of this) but silence = slavery = death
at 11/10/2011