My response to this fantastic article on the title subject: (read first ~ www.makeuseof.com/tag/favorite-video-disappeared-youtube/ ) 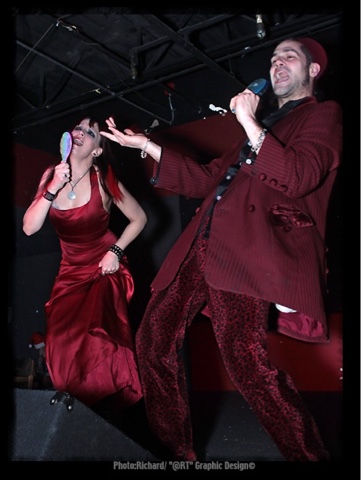 photo: a live "air duet" or lip sync performance by me and Garth from Airpocalypse aka burlesque performer "Les Manley" copyright of photographer and in video form would be media owner of the musical content selection who is not Cyndi Lauper and The Hives...
If I had a nickel for every video uploaded onto YouTube in just one hour of one day, properly invested and carefully handled, I could live out the rest of my days on earth without being required to do labor for my food & shelter and thus survival. But unfortunately I am just an artist and original content creator who's talent almost entirely relies on collaborating with other artists or licensing content, gaining their permission, or claiming fair use of the copyrighted content of my videos based on the fact that my audience is viewing them strictly to see my artistic interpretation of any other copyrighted work I might use as my muse at any given moment and not to listen to my audio playing in the background. I am a dancer, choreographer, actor, and theatrical performing artist which means I am possibly the epitome of legally screwed when it comes to copyright laws because technically if it's not my camera and is a public performance I don't own it, and if it is my camera because I'm smart.. but there's any sound whatsoever picked up on my video footage like a 20 year old Depeche Mode song on the radio of my next door neighbor's house, some huge ass media conglomerate corporation (and not the band btw) automatically is set up to receive my $ buck and some change each month if I don't want to or can't afford to pay my legal fees in court. Actually it pivots on the likelihood that I'm too dumb or scared to know that my choreography or expressed opinion and therefore authored statement to which I'm free to publish and distribute for profit all I'd like provided there is a demand for it and simply not contest it and allow them to take all the revenue just feeling lucky my YouTube account isn't in jeopardy because that would be embarrassing and if I lost my gmail or something I'd cease to exist entirely and die from starvation or my lack of social media attention ~ *omg the horror!!? Heh
THE SYSTEM IS BEYOND BROKEN.. AND WE HAVE A HELL OF A CLASS ACTION SUIT FOR RETURN OF OUR AD REVENUE actually.... Depeche Mode song 20 years old? Are they alive still? I agree after 20 years it should be public domain for public use without distribution rights (manufacturing and selling copies on a cd rebranded as nostalgia). Even "top secret" military classification expires after 50 years and despite the origin of any pop culture icon it eventually becomes the public's reaction to it more than it ever was any kind of copyright-able content no matter how much was spent on the making of it! IT'S A MEME.
at 3/05/2016