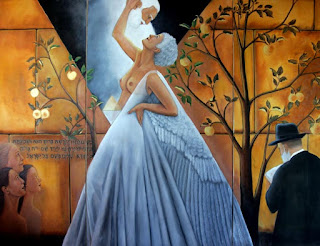 Exodus 3:13-15
(13) And Mosheh said to Elohim, "See, when I come to the children of Yisra'el and say to them, ‘The Elohim of your fathers has sent me to you,' and they say to me, 'What is His Name?' what shall I say to them?"
(14) And Elohim said to Mosheh, "I am that which I am."(1) And He said, "Thus you shall say to the children of Yisra'el, 'I am has sent me to you.'" Footnote: 1The Hebrew text reads: 'eyeh 'asher 'eyeh, the word 'eyeh being derived from hayah which means to be, to exist, but the Aramaic text here in v. 14 reads: ayah ashar ayah. This is not His Name, but it is an explanation that leads up to the revelation of His Name in v. 15, יהוה namely.
(15) And Elohim said further to Mosheh, "Thus you are to say to the children of Yisra'el, 'יהוה Elohim of your fathers, the Elohim of Abraham, the Elohim of Yitshaq, and the Elohim of Ya'aqob, has sent me to you. This is My Name forever, and this is My remembrance to all generations.'

Wow! Crazy! That's what I heard on top of the mountain known as "Herb of the Rock" or the property of Afri-I in NE Washington state where I was staying to study Rebirthing in November of 1997. I asked Great Spirit for my true name, the name of I who will or my Holy Guardian Angel incarnated in the flesh to do the Great Work here and now... Certainly not looking for the name of the most holiest holy but that which describes the holiest part of me! Suppose they are one and the same? Interesting epiphany about the modern Christian interpretation of the Bible and how God is thought to be a He or strictly a masculine archetype well He as in YHVH is feminine and translates into either the mother or the daughter as in those of the Earth who the Annunaki fornicated with and begot the sons of Earth... My birth name btw is Heather :) 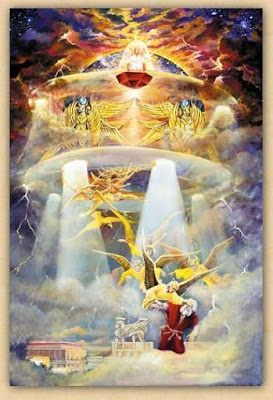 That which has been will be. That which is done is what will be done and there is nothing new under the sun.
at 3/22/2010