THE TEMPLE OF SOLOMON
THE KING 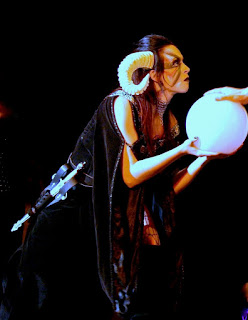 THERE is a woman, young, and beautiful, and wise, who grows not old as she dances down the centuries: she was in the beginning, and she will be in the end, ever young, ever enticing, and always inscrutable. Her back is to the East and her eyes are towards the night, and in her wake lieth the world. Wherever she danceth, there man casteth the sweat from his brow and followeth her. Kings have fled their thrones for her; priests their temples; warriors their legions; and husbandmen their ploughs. All have sought her; yet ever doth she remain subtle, enticing, virginal. None have known her save those little ones who are born in the cave under the cavern; yet all have felt the power of her sway. Crowns have been sacrificed for her; gods have been blasphemed for her; swords have been sheathed for her; and the fields have lain barren for her; verily! the helm of man's thoughts has been cloven in twain by the magic of her voice. For like some great spider she has enticed all into the silken meshes of her web, wherein she hath spun the fair cities of the world, where sorrow sits tongueless and laughter abideth not; and tilled the fertile plains, where innocence is but as the unopened book of Joy. Yet it is she also who hath led armies into battle; it is she who hath brought frail vessels safely across the greedy ocean; it is she who hath enthroned priests, crowned kings, and set the sword in the hand of the warrior; and it is she who hath helped the weary slave to guide his plough through the heavy soil, and the miner to rob the yellow gold from the bowels of the earth. Everywhere will you find her dancing down empires, and weaving the destiny of nations. She never sleeps, she never slumbers, she never rests; ever wakeful, day and night, her eyes glisten like diamonds as she danceth on, the dust of her feet burying the past, disturbing the present, and clouding the future. She was in Eden, she will be in Paradise!